I don’t own many punches because my craft area is small and, therefore, my storage space is restricted. I managed to make room for a new punch that I can’t live without, despite its large size: a two-in-one punch of striped half-circles by EK Tools. It offers two variations of the same design, which has an Art Deco look that I love. The best part: punching the pattern twice gives me a 5-inch length, the perfect size for my square cards.

After some practice (I found that this design requires the paper to be several inches long, for stability while punching), I created two different cards using the punch in different ways.

Here’s how to make them:

Card one: Trees of the season

Punch the bottom edge of a piece of red textured cardstock with a striped-arches border punch (I used the second design on the striped arches Paper Shapers punch by EK Tools; with this punch, it’s best to have at least a 7-inch edge to work with), and trim the cardstock to 5 inches by 10 inches.

Cut a 5-by-4-inch piece of white pearlescent cardstock (mine’s from Colorbok’s neutrals pearlescent paper collection), and stamp a tree image (such as birch tree by Savvy Stamps) several times in Versamark ink, starting off one edge and finishing off the opposite edge, varying the heights of the image as you go. 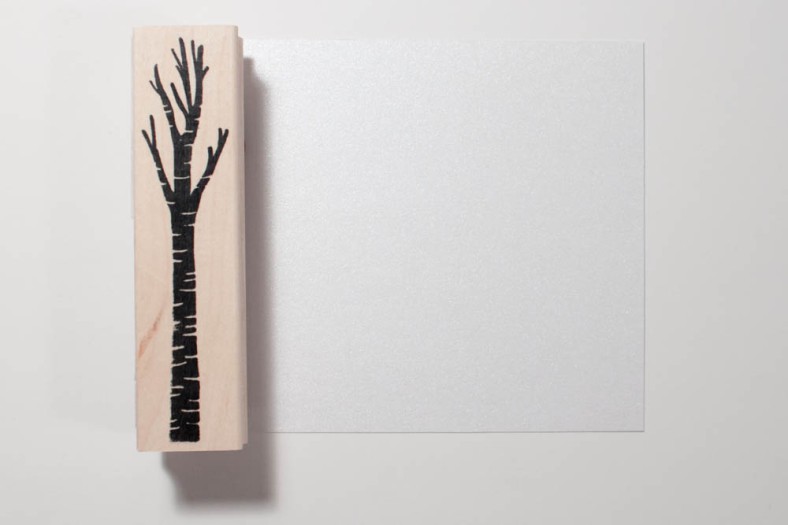 Heat-emboss the powder, and trim the cardstock so that it is 3 inches high. Cut a 5-by-3 1/2-inch piece of black cardstock with a varnished floral pattern (such as from the Black & White Butterfly collection by Me & My Big Ideas), and adhere the white cardstock, centered, to it. Adhere the black cardstock to the card’s front, centered between the top of the card and the punched border.

Cut a 3-by-1-inch piece of silver textured cardstock (mine’s from The Metallic Stack by Die Cuts With a View). Turn it over and stamp a banner image (such as from the Portfolio collection by Pink Paislee) in any color ink (I used gray).

Cut out the banner. Stamp “SEASON’S GREETINGS” (such as from the Season’s Greetings by Bella Road collection by Echo Park Paper Co.) in black ink (I used StazOn in jet black because of the metallic paper’s slick surface). 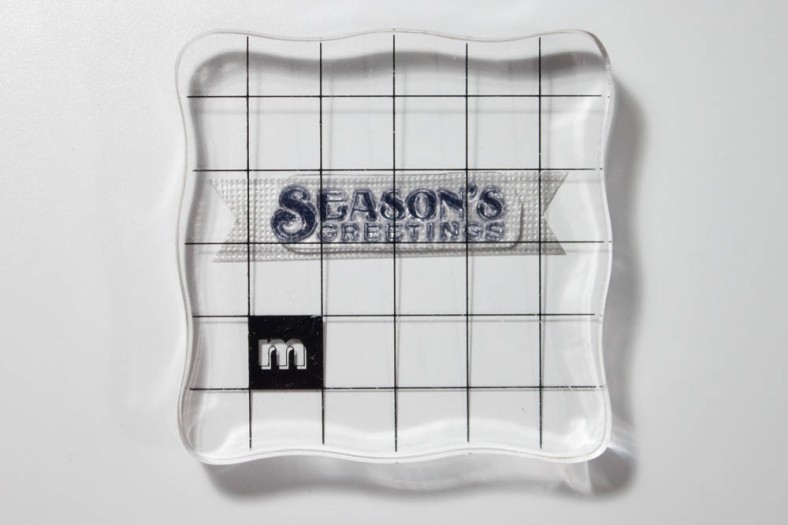 Using dimensional adhesive, adhere the banner over the bottom edge of the white cardstock and over the black cardstock, close to the right edge of the card. Affix several clear, gray and red rhinestones of different sizes to the tree images, placed randomly on branches.

Card two: A touch of red

Punch two 5-inch lengths of a striped-arches border (I used the first design of the EK Tools punch) in thin, silver glitter cardstock (mine’s from the Fresh Paint collection by Marcella by K). Trim the paper above the punched segments to about a quarter of an inch high.

Adhere a die-cut of a 2 1/2-inch white snowflake (I created mine using my Making Memories Slice Elite, “Mistletoe” design card and white textured cardstock) close to the right edge of the card and centered over the red paper.

Affix a large clear rhinestone to the snowflake’s center.